Live Tracks features a wide range of music, from early '60s rock and rockabilly, to folk, blues, bluegrass, jazz and beyond. The program frequently airs songs from local performances recorded here in Davis. Live Tracks began broadcasting on KDRT on Sept. 30, 2004, and has produced 625 unique programs as of July 2021.  [To be honest, Live Tracks is rather odd.  Just sayin'...]

Miles Ahead, the new biographical movie about Miles Davis starring Don Cheadle in the title role, opens this week in theaters in Sacramento. A fitting time for Jazz After Dark to feature Miles Davis. Nine Grammy awards, 48 studio albums, 36 live albums: Miles Davis was one of the most influential and creative musicians of all time. We’ll hear selections from some of Miles’ work recorded 1951 – 1958: Bags' Groove * Miles: The New Miles Davis * Blue Moods * Dig * Porgy & Bess * Steamin' With The Miles Davis Quintet. Then work by others celebrating some of his signature pieces. Eddie Jefferson vocalizing So What, Al Jarreau on Heaven and Earth, and two by Shirley Horn: You Won’t Forget Me, with Miles in a rare performance as sideman, and then Shirley’s version of Summertime. Finally, Maids of Cadiz from the last Miles Davis album, Miles Davis and Quincy Jones Live at Montreux.

The Sacramento Bee's Jack Ohman won the 2016 Pulitzer Prize for cartooning on Monday, April 18th. In January 2015, he appeared on Davisville for an interesting interview about subjects ranging from the deaths at the Charlie Hebdo satirical magazine in Paris (they had just happened), to his work as a writer and cartoonist, the role of a cartoonist, leaving his longtime home in Oregon for California, drawing Gov. Brown, his sense of Davis, and the humor in fly-fishing. Ohman has now earned a distinction shared by the likes of Garry Trudeau, Tom Toles and Pat Oliphant.

Groove! is the first studio album by Boulevards, following his self-titled debut EP released only last year. Boulevards (the stage name for singer/songwriter Jamil Rashad) is a funk artist that updates the classic sounds from legends like Rick James and Prince for a new generation. The production merges modern synths with old-school bass lines in a generation-spanning mix of sounds and styles, while the lyrics evoke images of romance on the dance floor, especially on the seductive "Tender." The aptly named Groove! is full of tracks designed to get people moving, from the energetic "Move & Shout" to the hypnotic "Got to Go," a holdover from Boulevards debut EP. In addition to funk, hip hop makes an appearance on "The Spot" as well as "Patience," an irrisestibly funky beat and defenitely the standout track on the album. Overall, while the album isn't groundbreaking, it feels fresh and fun, with enough contagious beats and delightful grooves to warrant a listen. For funk fans, Groove is a welcome callback to classic funk that updates the genre in interesting and exciting ways.

This week, Listening Lyrics takes a look back at the musical contributions of Merle Haggard, one of country music's most gifted and prolific songwriters. During the 60s, 70s, and 80s, Haggard had an amazing streak of 26 number-one country singles. Haggard's early hits – including "The Fugitive," "Mama Tried," and "Okie From Muskogee" – comprise what Rolling Stone executive editor Jason Fine, in a 2009 profile of Haggard, called "the backbone of one of the greatest repertoires in all of American music, plain-spoken songs populated by the kinds of working people Haggard grew up with: farmers, hobos, convicts, widows, musicians and drunks." Quoting Bob Dylan, "Merle Haggard has always been as deep as it gets...totally himself. Herculean. He definitely transcends the country genre."

Smack dab in the middle of the last century, it became a busy stretch for private detectives on TV. The list of "private eyes" was lengthy. At the top of that roster was a gumshoe by the name of Peter Gunn. Watching Mr. Gunn was made even more of a household routine through the music composed for the popular series by another name still familiar: Henry Mancini--his compositions and arrangements of those tunes helped immensely. Now as Hank's birthday anniversary draws nigh, Gary Chew has chosen some cool Mancini sounds for part of this week's 3rd Streaming. Other pieces by Gershwin and David Amram round out this hour, only on KDRT.

There was one CD that almost never left my 5-disc changer in the mid-to-late nineties: The Bends by Radiohead. Let's revisit this fantastic album one month after its 21st birthday, shall we? If you've never heard it, you'll thank me. If you have heard it, well, you can thank me for reminding you about how great it is. https://en.wikipedia.org/wiki/The_Bends

Singer-songwriter Dirk Hamilton visits The Grapevine on KDRT Wednesday evening, April 13th, at 6 p.m. PT. Hamilton was born in Indiana and raised in Northern California. He picked up a guitar as a youth and was writing songs and playing live performances by the time he was in high school. He moved to Los Angeles in the late 70s and recorded four critically acclaimed albums: two while at ABC Records, and two while at Elektra/Asylum Records. A poet and musician known for his uniquely intelligent lyrics and passionate performance style, Hamilton creates music that can't be pigeon-holed into one genre or another, so indie rock, alt-rock, roots music, americana and folk-rock are often used. For his lyrics and performance style he is most often compared to Dylan, Van Morrison, and John Hiatt. Visit Dirk at www.dirkhamilton.com 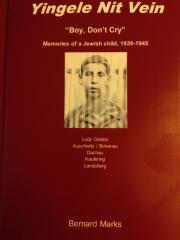 Bernard Marks was a child living in Poland when Nazi Germany invaded at the start of World War II. Over the next several years he saw, endured and survived immense cruelty, including internment in the Auschwitz and Dachau concentration camps. After his liberation at the end of the war, he came to the United States. Now in his 80s, he often speaks to students (including in Davis) about his experiences, and today we hear his story (which continues in part 2). This is powerful.

The Downtown Davis 2nd Friday ArtAbout hasn't been the same since KDRT starting broadcasting live from Armadillo Music. This edition of Live DiRT originates at Armadillo at 6:30 pm on Friday, April 8th, with Gravy Nation. The event is free, open to all...RSVP on Facebook! :)