Dug Deep hosts San Francisco's own The Brothers Comatose for an in-studio interview and live performance on the March 19th edition of Dinner Bell Roundup, starting at 4 pm Pacific time on KDRT. The segment is part of "Live DiRT," KDRT's pop-up live-music feature.

The band will likely play songs from their latest release, City Painted Gold, their third studio album. Between a solid couple of releases and a highly energetic live-performance style, The Brothers Comatose have inspired a loyal following of folk fans, who helped to fund this album on Kickstarter. The frontmen for the group are brothers Ben and Alex Morrison, who provide lead vocals for the band, with Ben on guitar and Alex on the banjo.

For a songwriter confronting some of the more unsettling facets of life in contemporary America, Silas Lowe’s songs are highly listenable, witty, and fun. Each its own dark comedy, he fashions musical portraits of lives squandered in barrooms, spent struggling amidst failed economic policies, or lost in tragedies both natural and preventable. Audiences subject to Lowe’s distinct brand of comedic banter will find themselves asked to vote between hearing a song about “the intersection between humanity and modern industrial capitalism” and a song about “the illusionary upward mobility of the middle class” -- sometimes, those are one and the same.

With a background in classical violin, bluegrass, and country, Andy Lentz adds depth and fire to any ensemble. He has performed and recorded with many artists including The Devil Makes Three, Rita Hosking, The West Nile Ramblers, The Brothers Comatose, and Nicki Bluhm. After many years of performing in California, Andy relocated to Austin, Texas, in 2011 and began playing with Silas Lowe, The Sieker Band, Cornell Hurd and many others. For tour info, see http://www.silaslowe.com/#!tour/c8vk

This week’s album of the week will be Camper Van Beethoven’s New Roman Times.  A true concept album, New Roman Times was the band’s 2004 reunion/comeback record after having been dormant for 14 years.  The concept was strange (what would you expect from CVB?), but intriguing, involving a plot about a fictional America divided into smaller republics (most notably the secular Republic of California and the Fundamentalist Christian Republic of Texas) that are at war with one another.  The band employs some none-too-disguised political jabs as well as indulges their taste for 1970s-style prog rock, mixed with Middle Eastern melodies and ska-based rhythms...All in all, a very fitting selection for KDRT’s Album of the Week in this very lively election season.  Dug Deep hosts this edition of Album of the Week.

This week's Gary Chew: 3rd Streaming opens up with some Brazilian music.  The L.A. Guitar Quartet is first with an exciting piece called “Bluezilian.” That's followed by more Brazilian sounds by Jobim … and, appropriately, the song is “The Waters of March” with Eliane Elias and a neat vocal group singing it in Portuguese and English.
“An Inspector Calls” is a theme from a film score written by Anne Dudley. Then Dizzy Gillespie's “A Night In Tunisia” is fiddled so well by the Turtle Island SQ. For the finale, it's Francis Poulenc's beautiful work “Aubade and Choreographic Poem For Piano and 18 Instruments.” Pianist Jacques Fevrier conducts members of the Lamoureux Concert Orchestra. 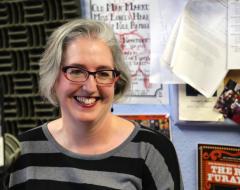 Frances Dolan, an English professor and Shakespeare expert, just won the 2016 UC Davis Prize for Undergraduate Teaching and Scholarly Achievement. On today’s program we talk about what constitutes good teaching, why Shakespeare is relevant, the value of literary analysis, and why she tells her students in the classroom that she can see them—that last part has to do with technology. This is an interesting discussion with someone who’s clearly very skilled at her profession.

The best way to describe Michael Nau's first solo LP, Mowing, is as an alternative indie-folk album that is about as eclectic as it gets. Everything is extremely stripped down and low tempo, leaving plenty of time for reflective lyricism that's laced with introspective observations. Nau's voice is as laidback as the skillful but simple instrumentation, never getting angry or excited, just crowing softly as the tune beats on. The best songs on Mowing are the more upbeat "The Glass," the emotionally resonant "Good Moon," and the funky single "Winter Beat." The album works best when you want to listen for relaxation; it won't pump you up, but it will settle you down smoothly and peacefully. Mowing isn't for everyone, but if you are into laidback indie folk, you can't go wrong with Michael Nau.

Peter Holden is a San Francisco-based pop/acoustic/rock musician who’s performed in California, Arizona, Texas, Georgia, and Connecticut, to name a few states.  His debut EP The Athens & Other Stories came out in June 2013.  The album is available on virtually every online download site.  A second EP titled simply EP#2 was released last year.  Peter’s sound is reminiscent of Matchbox Twenty, The Goo Goo Dolls, Jimmy Eat World, and the Gin Blossoms.  Peter grew up all over the country, travelling with his family.  Every place Peter lived became a part in his music.  Whether it’s the rocking EP#2 featuring “Tired of Waiting,” or “Wasted Youth” from The Athens & Other Stories, you’re sure to be singing Peter’s songs before you know it.

Listening Lyrics is honored that during the live broadcast we will be introducing the new CD by the Big Sticky Mess.  Big Sticky Mess traveled lightyears at rocketing speeds to Earth in search of you. Now, as if shot out of a cannon through the heart of a rainbow, the Mess is here bringing a kaleidoscopic mix of extraterrestrial hooks, vibrant grooves and potent beats, purely for your entertainment.  Close your eyes and hear the funky jams reminiscent of decades past with a sound much larger than the three piece arrangement before you should allow.  So slip another drop under your tongue and join the inter-planetary groove train that is the Big Sticky Mess.

All Listening Lyric shows are live on Fridays from 4:00PM to 5:00PM.(PST) on KDRT 95.7FM. For those outside the listening area, the show will stream live online at KDRT.org . It will also be available for replays in the show archives or as an podcast on iTunes under LISTENING LYRICS.