Join The Alchemist as he is raised from the dead, every Friday from 10 to Midnight PST on kdrt.org, 95.7 FM, and the whispering wind. Conjuring the lost souls of horrendous, hideous, heavy metal tracks to bleed the ears. The Alchemist blends scaring guitars, thundering drums, bludgeoning bass, and silent screams into a vortex of black doom, extreme thrash, and technical classic metal music. Hell awaits!

Davis is full of interesting people, ideas, connections, and events. On Davisville, host Bill Buchanan presents stories from in and around town that involve the Davis community. The show is a three-time winner of Journalistic Excellence awards from the San Francisco Press Club.

The Blessing and the Curse is Lance Canales' sophmore solo LP, his first studio album since These Hands, which was released all the way back in 2008. Canales brings all the bluesy, down-to-earth Americana sound one could ask for on the album, armed mostly with a simple yet well-utilized acoustic guitar and a deep, rusty voice that makes other Americana singers sound angelic by comparison. The themes on the album are very remeniscent of southwestern pioneer life, most notably on songs like the uptempo lead track "California or Bust," "The Farmer," and "Deportee," a song about a Mexican immigrants in America. Thematically, the album gets very dark at times--especially on "Death Got No Mercy," which is as depressing and downtrodden as it sounds--but ends on an energetic high note with the electrifying "Stomp it Out." Overall, this album is very good if not particularly ubpeat--a solid Americana album that uses strong lyrical imagery to get its ideas across about the troubles of life in the American West. 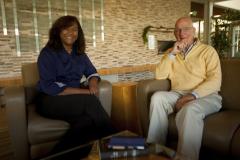 Dr. Angela Courtney, left, who earned a PhD in integrative pathobiology from UC Davis last year, has developed a urine test to detect breast cancer. She has also formed Adrastia Biotech with fellow UC Davis alum Mike Gilson to develop a commercial version of the test … and survived breast cancer herself. Today we talk with Courtney and Gilson about her remarkable work, and what it would mean to have a simple, early way to detect a cancer that killed 41,000 women and 400 men in the United States in 2012. They filed for a formal patent at the end of last August, and hope to get the test to market in about two years. (photo courtesy UC Davis)

Everything goes better with gravy. We at KDRT and Listening Lyrics are thrilled to get these 3 very talented musicians in the studio. "Gravy Nation is creating a stir in the Northern California underground rock scene. Local artist Christopher Hunt is the mastermind behind this rock trio along with Ryan Shickman on guitar and Billy Thompson on drums. The music is a delicious mix of sound that combines 90s guitar-driven rock with 60s pop sensibility. Gravy Nation is a product of Davis, California, a town that runs through their art and their blood." Visit and listen to GRAVY NATION here https://gravynation.bandcamp.com/releases. Getting into the GRAVY? Check out their music video here produced by Davis Media Access Kids Camp graduates Alec Lesnick and his brother Ed!

Adele's 25 is a bit of a phenomenon. You can't stream it in it's entirety and you may never be able to... we shall see. Released on November 20, Rolling Stone named the album #2 on its top 50 albums of 2015. It is the fastest selling record in the history of the world with 3.38 million copies sold in its first week. There are eleven tracks on this album and a mind-blowing ten different producers, including Danger Mouse and the Smeezingtons. Critics seem to like it, even though they also throw in great turns of phrase such as Pitchfork's Amanda Petrusich who gives the album an impressive 7.3/10 yet says "Still: the cumulative effect is sometimes as treacly as the heavily frosted sheet cake being slid onto the buffet table in the carpeted banquet hall where this song will be blasting, on a loop, for all of eternity. Even your most adorable aunt—the one who loves a Yankee Candle—will eventually drain her flute of sparkling wine, lean forward, and be like, 'Dog, this s**t is corny.'"

And I hate this album.

A new band in town is not especially newsworthy, but then this is no ordinary band. QuidZin out of Woodland, CA, has created a unique sound, and that does make it newsworthy. Just for that reason I have the pleasure of hosting them on Listening Lyrics this Friday 1/22. Members are Jim Hillard (brass), Randy Berka (bass), and Naomi Rogers-Hefley (fiddle). Their genre is a mix of jazz, Irish folk, and rock. Listen in as we explore their sound.

Dug Deep hosts singer-songwriter Bob Woodruff for KDRT's Live in the Loam on Friday, January 22nd, at 2:30 pm PT. Originally a member of the country-rock band The Fields, Bob has since released four studio albums as a solo artist: 1994's Dreams & Saturday Nights, 1997's Desire Road, 2011's The Lost Kerosene Tapes 1999, and the upcoming The Year We Tried to Kill the Pain.  His songs are anachronistic yet accessible, melodic yet gritty, intimate yet universal.

Stone Temple Pilots - Tiny Music... Songs from the Vatican Gift Shop. My favorite album by one of the first bands I loved as a young teenager. Scott Weiland's death last month resonated with me the way Bowie and Glen Frey did my parents this past week. (Although those ones matter to me as well). Tiny Music is 41 minutes long, so I'll probably break tradition and play a little Bowie, Motörhead and Eagles to fill our the hour. Justin Cox your host this week 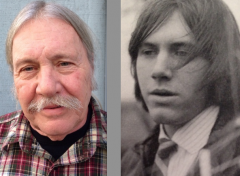 Oxford Circle, which formed at Davis High School, made it big enough in the 1960s to play the Fillmore, Avalon and other major stages in San Francisco and Sacramento, sharing the bill with bands like the Grateful Dead. Gary Lee Yoder (photo), Oxford Circle’s main singer and writer, and later a member of Kak and Blue Cheer, still lives in Davis, and his first appearance on Davisville 13 months ago became one of KDRT’s most popular shows online for 2014-15. Today he returns with more stories, including the first time he heard Janis Joplin sing—Yoder was backstage at the Avalon with Dead guitarist Jerry Garcia at the time—and sizes up the possibility of Oxford Circle playing again. “It’s on the back burner,” he says. “It’d be fun.”

Hurricane, released in 2013, is the third album by independent Mississippi duo R. Dyer and R. Thomas. The experimental-rock team dabbles in many sub-enres on this LP, even bordering on psychedelia, but they manage to stay grounded with a classic blues-rock guitar sound. On their more traditional tracks, they create a passionate atmosphere, with earthy vocals singing vague but thought-provoking lyrics. The best examples of this on the record are lead track "Butterfly" and title track "Hurricane," which provide six minutes of fun and inventive rock and roll. On the experimental side, the multilingual "Durare" and the wonderfully wonky "Delivery Pizza" bring new, unique sounds to the album. Overall, R. Dyer and R. Thomas manage to pack quite a few sounds and ideas into Hurricane, making the LP quite a fun and interesting listen for fans of many music genres.