Thank Your Lucky Stars strikes a notably downcast tone and posture when stacked next to Depression Cherry. There’s nothing about these songs that is outright melancholic, but there’s also nothing that reaches the same shimmering highs as, say, “Levitation” or “Space Song” on the earlier work, either. The closest this record comes to matching that level of majesty is the album opener “Majorette” and the closing track “Somewhere Tonight.”

Sandwiched between those two songs is an array of fantastically subdued and beautifully constructed dreamy psych-pop offerings that each possess their own unique vibe. Beach House has mastered the art of space by this point and seems to have an instinct for how long to drag out a keyboard melody or a guitar line before bringing in another element to keep things from bogging down. This is especially true on “Elegy To The Void,” which is carried along at a meandering pace by the same reverb-drenched guitar melody pattern, shifted into different chords and matched by an atmospheric synth.

Sound and Color is the second studio album by Alabama Shakes, an American alternative rock band that has found fantastic success in their short but strong career. Sound and Color is an atmospheric and sometimes psychadelic blend of blues rock, funk rock, R&B, and soulful Americana. Lead singer Brittany Howard powerfully sings mulitple songs on the record, most notably "Gimme All Your Love" and lead single "Don't Wanna Fight." However, the songs in which Howard's vocals aren't as loud can be just as impressive, including single "Future People" and the dreamily psychadelic "Sound and Color." The group has never been more cohesive, seamlessly merging danceable funk guitar beats with blues chords in a way that feels fresh and innovative while staying grounded. Alabama Shakes have dodged a sophmore slump, creating a truly original album that will delight fans of the group while introducing the band to a broader, more diverse audience. Simply put, Sound and Color is an excellent album worthy of multiple listens and many accolades.

Stolen from a review in NY Magazine when You & Me was released in 2008. I love these opening remarks:

The Walkmen have just made a gem of a rock album, but should anyone care about such a thing? You & Me is an album in the long-format sense of the word. It plays for about an hour, fourteen songs meant to be listened to one after another with undivided attention. It rewards that attention with small pleasures: guitar and organ playing off each other’s reverb, bass and drum dancing in and out of step, horns and vocals collapsing into a single bellow. In essence, it offers that luxuriant buzz that made rock and roll one of the great narcotics of the last half-century.

Settle into this one and hopefully, buy, enjoy, repeat many times over. 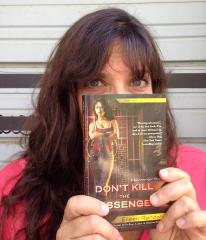 In her Messenger series, Davis novelist Eileen Rendahl tells the story of a young woman living in Sacramento whose unusual powers allow her to recognize and talk to supernatural creatures—including a vampire who’s also an emergency-room doctor, and a werewolf who has tended bar for nearly 100 years. On today’s show we talk about the story, her snarky protagonist, the appeal of supernatural fiction, and why the creatures are no longer the icons of dread they were in the classics ... which doesn’t mean they’re cuddly.

Rita Hosking is one of Davis' most prominent local artists, with a successful folk/country career spanning a decade, her first album debuting in 2005, and her latest, Frankie and the No-Go Road, in 2015. Rita's style echoes old-fashioned Appalacian music, and it is evident on Frankie that she wishes not to vary her style too much but instead embrace it completely. Rita sings with passion and power--her lyrics are both timeless and relevant--and it is those deep, thought-provoking vocals that make this concept album shine, especially on tracks "Power Moving In" and the haunting "Our Land." The most prominent instrument on Frankie is Rita's guitar, which strums along melodically and continuously, bringing cohesiveness and consistency to the album. All in all, Frankie and the No-Go Road is another solid addition to Hosking's catalog and a worthwile listen--for Rita's fans and for anyone who enjoys bluegrass, folk, or country music and excellent songwriting.

STEPHEN MICHAEL POCUS - Musician: keyboard. Do not listen to this episode of LISTENING LYRICS while drinking Red Bull or coffee. Stephen will bring all the energy we need. He has been playing piano since the age of 10, but has been surrounded by music his entire life. He began playing by ear, writing songs and leaning from his parents and siblings. By the time he was 14 he was playing at local Winery’s and Brewing companies doing private parties and events as a solo artist. He also was playing in his high school jazz band and his own side project metal bands with friends. During that time, he was also involved in the San Jose Jazz Society programs going to jazz camps during the summertime and participating in their Advanced Youth Latin Jazz Ensemble and Advanced Youth Jazz Ensemble groups throughout the school year. After graduating high school at 16, he began playing in the college level jazz bands at West Valley Junior College and was working steadily as a work for hire pianist.

John Vanderslice to the rescue! I didn't know what to play this week, so i searched the phrase "produced by JV" on the internets and voila! Chasing White Light by The Lonely Wild. This album is *perfect* for AoTW!!
The following description of the album is from the artists' website for two reasons: 1) I know nothing about this band and 2) I am still on my first listen of the thing. I just now found this band and album by searching to see what albums John Vanderslice (owner and producer at San Francisco and now Oakland's Tiny Telephone) had recently produced. CWL has absolutely everything I love in an album for AoTW...