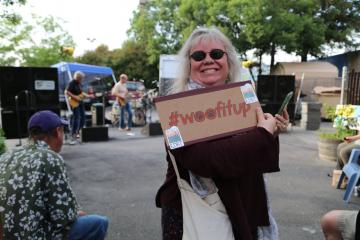 Diane Crumley has been involved with KDRT 95.7 FM since the initial station launch in September 2004. For the past 10 years, Diane has assisted with the outreach and logistics of the monthly concert series Thursday Live!, where live field recordings of regional and local musicians are obtained for later broadcast. Diane serves on the Fundraising Committee, the Operations Team and has developed and maintains the station's Facebook page. Diane organized KDRT's first benefit concert in January 2008 at the then newly-renovated Davis Odd Fellows Hall that featured Davis favorites Barry "The Fish" Melton joined by the Bill Scholer Blues Band, in order to raise funds for the "Save Our Station" SOS campaign against loosing our frequency to a commercial station. Since then, the Odd Fellows Hall has become a premier live-music venue in downtown Davis, and KDRT 95.7 FM has continued to broadcast live from there for many community events to raise funds for important causes including the Help for Haiti Benefit, the annual Davis Music Festivals, the 2011 Benefit for Habitat for Humanity International, the 2014 Neighbors for Nepal, and the 2017 and 2018 Northern California Fire Relief fundraisers.