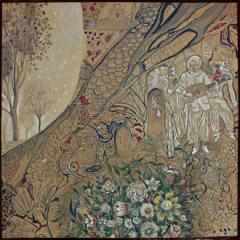 Over the course of three albums and several hundred mesmerizing shows, audiences have consistently heard something dramatic and altogether different from mewithoutYou. Spirits have been jolted and calmed, in equal measures.

"it's all crazy! it's all false! it's all a dream! it's alright" is another daring adventure charted by frontman Aaron Weiss, guitarist Michael Weiss, bassist Greg Jehanian, and drummer Rickie Mazzotta. Helping to further stretch the group’s boundaries is the production duo of indie dynamo Daniel Smith (Danielson Familie) and Philly workhorse Brian McTear (Mazarin, Matt Pond PA).

Much of the mewithoutYou anguish of old has given way to a sense of gentle wonder, as the band and a whole slew of guest musicians have unearthed strange and beautiful sounds that accompany the album’s many marvels. A more tranquil Aaron, following an artistic progression he began on Brother, Sister, has more or less dropped his signature sing-shouting and is now a full-fledged singer. The band remains in left field, but one that continuously draws to them more eccentrics, seekers, and lovers of original music

Host this week is JUSTIN COX