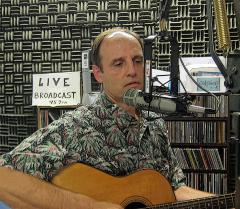 If you have been around town to some of the open mics for singer/songwriters you have probably seen Dan Dressen. Dan likes to paint a picture with lyrics and his guitar. Dan is a Davis resident and we are thrilled that he spent an hour with us to chat about his music and performing some of his favorites.

"Dan first learned to play guitar as a teen in the 1960's. He is self taught and mostly plays for his own entertainment. His music interest is influenced by the singer/songwriters of the early 1970's especially the lesser well know song writters including John Hiatt, John Prine, Tom Paxton, Robin and Linda Williams, Guy Clark, Townes Van Zandt and others. In 2011, Dan took a chance at playing for other people at several local open mic venues. It has been said that he does "talking songs" or ballads but he likes to think that he plays songs that tell stories."

See Dan on YouTube along with the several other thousands of people. http://www.youtube.com/user/pseudosage