Bryce Parker joins Ruth for another show.  We are happy to have the well-known television film maker, Bryce, jump in the skit "The Craft Show."  Ruth and Bryce share the craft anyone can do, including Ruth and Bryce.  Somehow five yellow pencils get glued to a table.  There is also an interview with Parker about his film, "The Rectangular Age." 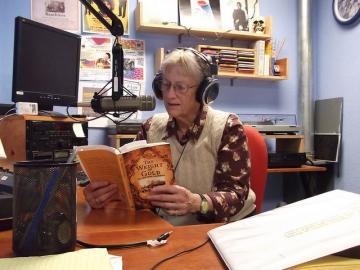 Ruth wrote the book "The Weight of Gold" all about the 1849 Gold Rush in California. It was this Gold Rush that gave hope to people all over the world, and money, too, and free land. The energy of the Gold Rush inspired writers to expand their talents and share many possibilities with people of dreams. Mark Twain was the big talent of the West, but Jules Verne way over in France was also part of this explosion of talent, and so was Baum of "Wizard of Oz" fame, and Anton Chekov. Ruth reads all these authors as well as her own stories.